Its time for the last post about our weekend away because I know by now your all sick of hearing about it, but for the final post I wanted to do a little run down of what we got up to and to share with you some pictures from the weekend.

Brace yourself, this is a long post! Get yourself a cuppa, a biscuit and maybe cancel your plans! But otherwise, I hope you enjoy it!

Thursday – We got up quite early, showered, packed up the remained of the bits we were taking and loaded the car ready to go.

A few hours later we pulled into a service station and picked up a cheeky Starbucks as we were both in serious need of a caffeine fix, and a few snacks to see us through the rest of the drive. After about fifteen minutes were back on the road and had settled in to easy conversation, laughing, smiling and falling in love again. Being side by side with him, laughing and joking reminded me of why I fell in love in the first place, our connection is everything and the way we feed off each other to take a small joke to the next level is partially why I fell in love with him, that and for me, he is beautiful, inside and out. He makes me happy and that is never more evident than when we are alone, and lets be fair, on the open road, there’s only really the people in the car, no outsiders, no one to interrupt or interfere.

Around 5pm we arrived in Bude and after getting a little bit lost on the one way system we eventually found the hotel. On arrival we were greeted by no available parking, and after a tight 3 point turn we entered another carpark, that was £15 per day. Neither of us were happy but when we attempted to pay at the machine, it told us to go into the building to pay, we tried both doors and got no response to we got back in the car and decided to just abandon the car outside the hotel, check in and figure out parking from there.

When we got up to our hotel we dropped our bags and were looking out of the window at the sea view when we noticed there was a second car park at the back of the hotel that had spaces in it, so we decided to move the car and head off into town to find some dinner because at that point we had both had a packet of crisps, a chocolate bar and a starbucks.. which lets be fair, is no where near enough.

We walked into town slowly and looked at the menus in various pubs before settling on a pub and heading in. We found a table a pub called The Globe and sat down to read through the menu again and choose a meal. We both went with the mixed grill on account of being incredibly hungry and both got a pint of cider to wash it down with. Food arrived a little bit later and for £15 we were both impressed 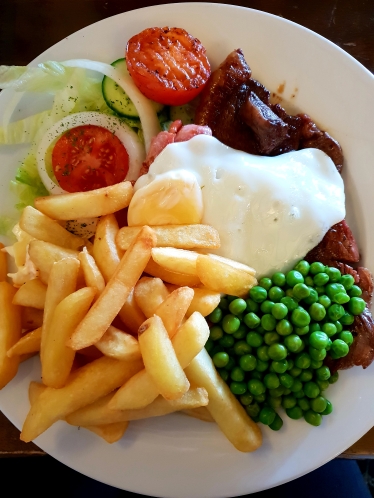 After dinner we headed back into town and took a costal walk up to a nearby cafe that was still open and serving beer. We got another bottle of cider and sat outside watching the sunset, chatting away until our bottles were empty. We headed off back to the hotel and got into bed with the tv on until we were both ready to go to sleep.

Friday – We woke up to a text from my dad saying that we needed to travel to a town called Mevagissey and get fish and chips. We decided to trust him and after getting showered and ready we headed off on the near two hour drive down to the little harbour town to find “a chip shop on the left just before the harbour”. We had no name to go by, just a destination so we found one that fitted the description and joined the queue. About 10 minutes later we were at the end of the counter collecting our fresh fish and chips.

Now the fish and chips were absolutely gorgeous, what I got to eat of it because shortly after opening it, I was attacked by seagulls who stole half my fish! But hey, the bit they didn’t get was amazing.

From here we set off back up towards the Jamaica Inn, an old pub / hotel that was used by smugglers. 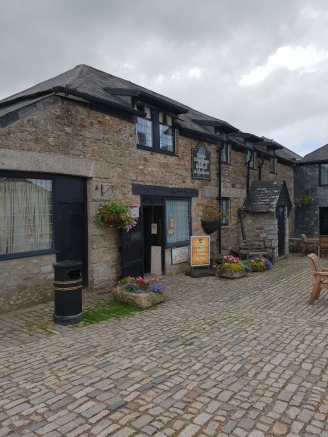 The Inn is said to be extremely haunted and now houses a Smuggling Museum which is why we were there. The Inn was also the inspiration for a novel by the same name written by Daphne Du Maurier. We paid the nice lady our money and she explained how we get around the museum and off we went to learn about the Smugglers.

After this we headed back to the hotel, to have half an hour before heading out to find a pub to watch the Spain Vs Portugal match. Now I am one of those people who is only interested in football during the world cup, and I had a special interest in this game as I have money riding on Spain, as they are my team in the Sweepstake at work. We watched the first half with a bottle of cider and then decided to go somewhere else to find food because the pub we were in didn’t really offer food, just nibbles. A little way down the street and we found a little restaurant called The Shack that had a decent looking menu. We both went with burgers, Ben got another Cider and I went for a milkshake because I’m not a big drinker, I can have one or two and that really it for me.

Saturday – We headed out to a small Harbour town called Port Isaac, and after the second parking debacle of the weekend, we got parked up and headed down towards the harbour to get some breakfast. We found a small cafe and ordered our food and a coffee and sat chatting away. The lady who owned the cafe was super nice and friendly and was explaining to someone that the town is used as the filming destination for Doc Martin which if your from the UK you have probably heard of. 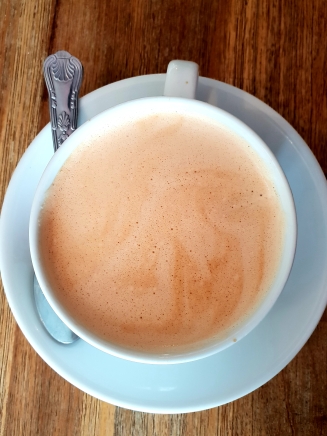 After food we walked further into the town and had a look in the shops and walked down onto the sand before following the coastal path back up to the car park and on to our next destination.

We had planned to go to Tintagle and see the castle because we missed out last time but the weather had turned and it was starting to rain slightly so we changed our minds and decided to go to the Cornwall At War museum instead (Are you noticing a theme here? Ben and I LOVE a museum and if its themed around the World Wars you can sign Ben straight up!)

Arriving at the museum we were saluted upon entry, parked up and headed in to pay. We were given a map to follow that lead us through the exhibits and at that point we were left to our own devices to explore the museum in our own time and at our own pace.

We were there for hours looking at the different exhibits and talking amongst ourselves about the wars, the people in our families who served and Ben just shared with me his knowledge of the wars, on the way back to the hotel we talked more about it, and gave the museum a little review between ourselves, determining that whilst is was fantastic, very well kept and very informative, there could have been a little bit more information in terms of explaining what you would find in each room.

Back at the hotel we had a quick rest before nipping out to grab some last minute Fathers Day Gifts for my Dad and Step Dad. We went down to the North Coast Wine Company to get a bottle of Cornish Gin (A tradition between me and my dad is that I get him a bottle of Gin when I travel and he receives it as a Birthday / Christmas present) and to find something for my Step Dad, which we found in the form of a craft ale selection box. We returned these to the hotel just as it started to rain and then headed back out for something to eat.

We ended up at the same pub we had gone to on the first night but this time we ordered something different. What I liked about this pub is that when we walked in the bartender greeted us and said “two mixed grills?” We laughed and said “maybe not today” but it was lovely that in a town full of regulars and tourists, he still managed to remember our faces, and our orders. In the end Ben went for a Chicken Curry with Chips, and I went for a Cornish Pasty with Chips and Beans, because lets face it, a trip to Cornwall wouldn’t be complete with out one.

We headed off to the beach for one last time and then walked back at the hotel for the fourth time that day. We set about packing up what we could in preparation for leaving the next day, and then got into bed to get a good nights sleep.

Sunday – Morning came and after a quick shower, we packed up the rest of our bags, checked out, loaded the bags into the car and then took a quick walk into the town center to grab a coffee.

A few hours later and we were back home, and after ordering a cheeky Dominoes we were ready to call it quits on the weekend and crawl into bed.

So there we go, a run down of our weekend away. I cannot recommend Cornwall enough if you have never been, even if you have it’s worth going back again!

I realise this is a super long post so congrats if you made it this far! ❤

I hope you have enjoyed this post, let me know in the comments if you want to see more posts like this!