Well, that’s a title and a half!

This post is actually all about one day. Monday. It was a day. I went through a fair amount of emotions in that day.

The title isn’t in order, so I’m going to start this talking about the Cancelled Plans portion. But I want to warn you, this is going to be a bit ranty.. Because even three days after this, I am still salty.

So basically a few weeks ago a friend of mine asked me to meet for coffee. Now, we work in the same building, but we never see each other. I may see them for like 10 minutes, once every two weeks. So I jumped at the chance for coffee and a catch up. After agreeing a date (Monday) and a time (1:45pm) and a destination (Costa near work) I came home and told Ben, who was fine with it, and just like “yeah cool, few hours on my own” so everything was settled.

Sunday arrived, and I text my friend “hey, we still on for tomorrow?” He replied “yeah absolutely” so great. Still on.

I wake up Monday morning, I get showered, I get dressed, I did my hair and make up and then I went and sat with Ben for a few hours before I went. At around 1pm I text my friend again to confirm we were still on.

Heres why I asked again. My friend has a habit of cancelling last minute. We have attempted to go for coffee probably once a month for the last 6 months and we have been for coffee zero times in that time. That boils down to him.

So I text him again to confirm. Guess what? “Oh no, sorry I can’t”

Literally within 24 hours, he couldn’t come for coffee.

This pisses me off so much. Like I don’t get it. Whats worse is that I know if I hadn’t text him to confirm he wouldn’t have said anything, and I would have driven out to the Costa and been sat in the carpark like a looser. So yeah, I was annoyed and stomped around for a bit about it.

Its been three days and despite the unread “am I in your bad books?” message, I’m actually not speaking to my friend. Like I realise this is a bit pathetic but what is the point? We don’t see each other, we make plans and he cancels. I have never cancelled on him and thats what annoys me. I am quick to change my plans for him and he can’t do the same for me.. so why am I still putting in all the effort?!

Anyway, Rant over on that respect.

I was due to have my mum and my uncle come around to see the new house at about 3:30PM after I had gotten back from my coffee shop visit. But as that had fallen through I called to see if they could come earlier.

I haven’t seen my uncle in years. So I was super excited to see him, and he was meeting Ben for the first time so I was thrilled with that.

The whole thing went really well, I made cups of tea and handed out cake. Diesel (our doggo) fell in love with my Uncle and spent the whole time curled up on his knee. Everyone got a long and it was lovely.

My mum asked why my plans had fallen through so I told her exactly what I told you and my uncle was like “Oh, what you should do is agree to meet him, leave it till last minute then cancel on him” and whilst, I know where he is coming from, I don’t see the point in being as bad as him.

A cup of tea, and a two hour chat later and they were ready to leave. We said our goodbyes and had a hug, and a few minutes later they were driving away.

I actually felt a little bit sad by this because as I said, I haven’t seen him in years and I don’t know when I’ll see him again and that sucks.

About an hour after they left Ben and I headed out to have a belated dinner date for our anniversary. We went to the local shopping centre because it has a huge food court so plenty of restaurants to choose from.

We walked around the whole place and it came down to Wagamama (my absolute fave) or T.G.I.Fridays. We settled on T.G.I’s because I had never been and Ben hadn’t been in years so we headed in and got seated.

Ben ordered a cider, and I ordered a chocolate milkshake which was incredible.

We shared a started which I forgot to take a picture of. We have cheeseburger tacos and they were lovely. I think they are something I would make at home.

We moved onto the mains and I had ordered the ‘Gravy Seal’ burger. Which basically has a beef burger, a chicken breast and some popcorn shrimp, with chips and a small pot of gravy. 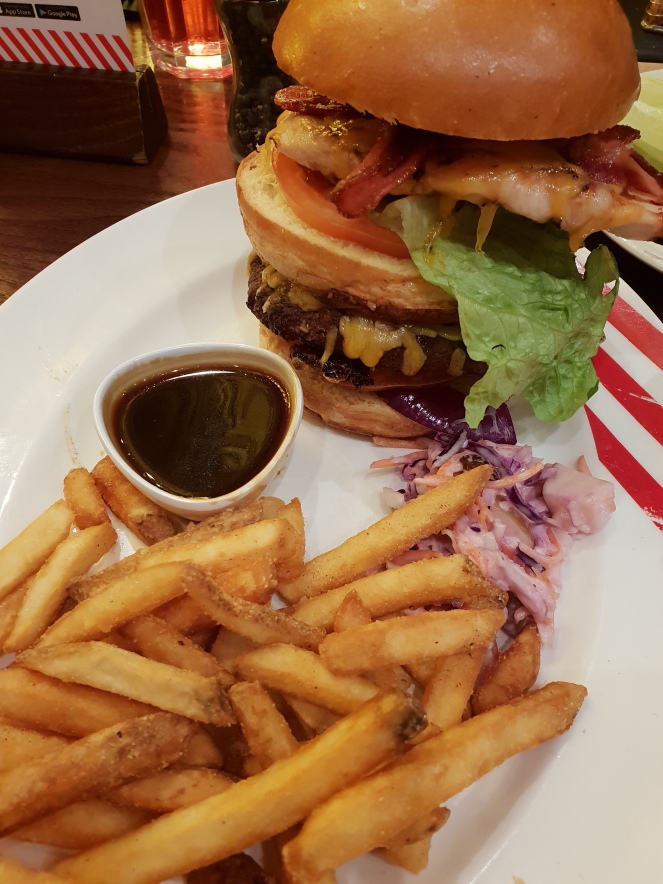 The food was lovely, however, I don’t think I would go again. I enjoyed it but I couldn’t help feeling a little underwhelmed and that it was a bit over priced for what it was. But who knows, if I was invited along as part of a group, they yeah sure I would go.

I loved being with Ben, just chatting away with him. He’s my favourite and he makes my heart burst with joy.

So there we go. A full day run down and a mash up of emotions.

What a day it was.

Have you guys ever experienced anything like the cancelled plans debacle? How would you handle the situation?